Enough time has passed that my heart is no longer in my throat when I talk about it.  Well, not in my throat and pounding and making me nauseous.  For all the grief that my dog causes me, I do love him.  And I'm pretty sure I wouldn't do very well if he pulled stupid stunts like this on a regular basis.

To add pictures to the colorful commentary that I've been giving everyone over the last couple days:

Setting the stage--Kolbe had done brilliantly on his first 14er two weeks ago, navigating the boulder fields of Mt. Bierstadt like a pro.  I had no qualms about taking him on another one, my second summit of Gray's Peak (3rd attempt, but who's counting).  I even remembered to bring the good leash this time.

We hit 13,000 feet without a hitch.  Then we stumbled upon a couple mountain goats.  Not my first sighting, but definitely Kolbe's first. 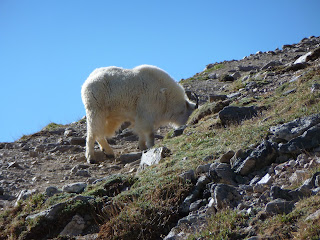 I started with a firm grip on the leash as he lunged for the mystery beast. 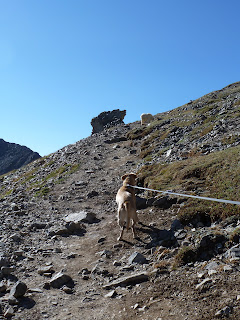 After the first goat went behind the ridge, I focused my attention uphill and onward.  Another goat lay another couple hundred yards in the distance.  Little did I know the first one came back to make another appearance.  Kolbe ripped the leash out of my hand and started sprinting for the goat up the hillside to the right.  Unfortunately, he hasn't lived his whole life navigating the loose rock.  He quickly lost purchase and started tumbling down to the left, gravity winning over instinct and balance.  Just before hitting the tiny landing before the cliff dropped off several hundred feet below, survival kicked in and Kolbe skidded to a stop.

He sat at the bottom, glancing alternately between the goat (as if he could still get to it) and us (who were frantically screaming his name).  He wisely gave up on the goat and started back up the rock, sliding down a foot for every two he climbed.  Eventually, his leash caught between two rocks and I had to slide down halfway to free him.

All things considered, ripping off a couple pads and a toenail, while causing a fair amount of bleeding, left him relatively unscathed.  He was actually able to finish the hike, albeit with a lot of coaxing.
He was walking fine, just worn out.  Trust me, I don't consider it dog abuse, because he obviously felt well enough on the way down to resort to humping dogs he just met.  Yes, he's neutered.  The back of my dad's car looked a little bit like the storage site of a dead body, but once I got everything bandaged, he looked like a champ.

Someone asked when our next 14er would be.  With him, probably never.  No wonder I call him Spaz Butt.
Posted by M Zap at 9:48 AM