Well, my family won't be winning any marketing competitions promoting the climbs of Mts. Harvard and Columbia. You'll understand why when you hear about our slew of misfortunes. (Warning: I got a little long-winded)

Clue #1 that we were doing something wrong: at the trailhead, there is a registry box to document the number in your party, hometown, purpose, duration of stay in the wilderness, and method of transportation. Well, if 'llama' was an option, then clearly 'hiking' is the inferior choice. Shoulda brought the pack mammals. Since we were carrying our own packs, we continued up the trailhead, in good spirits and in search of knowledge. (We were attempting two of the collegiate peaks, remember?) We started out on an "excellent trail" followed by a "great bridge" which were both accurate descriptions but made 14ers.com seem like the superlative brigade.

Other than the fact that the 14ers.com directions weren't exactly accurate on the altitude of a "clearing" and a "fork in the trail", we reached our camping destination with little difficulty. Unless you count just over 2 hours of uphill with full packs and intermittent snow as easy. The campsites were abundant at 11,200 feet and we found a great spot to drop our stuff off as we headed toward Columbia. About five minutes into the next portion of our hike, we missed the trail junction delineating the paths to Columbia vs. Harvard. Not realizing this, we just kept looking for "cliffs to keep on our left (from the directions)" and kept going upward figuring elevation gain to be a positive thing. We somehow actually ended up on the Harvard trail and when it veered significantly toward Harvard, we started blazing our own trail, still unaware that we were completely lost. We kept checking the directions and pictures, but it wasn't until we were at 12,400 feet and an hour and a half into a climb consisting primarily of loose rock and scree that we realized we had missed the trail. Of course, we had led five other hikers on our treacherous route, which only magnified our idiocy. We entertained brief thoughts of trying to work our way around the east side of the mountain to reconnect with the trail before we decided that the incoming clouds and our tired legs may spell disaster. Failure #1. 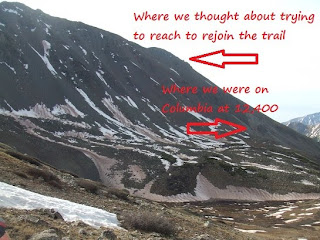 Eager to avoid repeating our mistake, after lunch we scoped out the trail to Harvard to ensure we started the next day on the right foot. The nap which followed was probably the only part of the day that went according to plan. Building a fire could have proved interesting as the first several "strike anywhere" matches failed to light. Good thing Dad brought a lighter. We quickly had a campfire going and then proceeded to use our brand-new JetBoil to boil water for our dinners-in-a-bag. Turkey Tetrazini proved to be delicious and nutritious, but it turns out it looks like vomit if you dump it all over yourself. (Laura, the food is supposed to be consumed orally, not transdermally.) Chili Mac was a little heartier, and nobody felt the need to wear it. Even our water purifier was working nicely. Our trip seemed to be back on track. Until we tried to go to sleep.

Let's just say that the birds were not agreeable to silence. And the night was colder than it should have been with a sleeping bag rated to 20 degrees. And the ground was hard. The sleep was intermittent at best, but I did wake to a beautiful, albeit chilly, morning with a roaring campfire. After two cups of coffee and a full bowl of breakfast scramble (love that JetBoil), we were all ready to hit the trail. The right trail this time. Oh, forgot to mention that the scrambled eggs were a little soggy because someone forgot to read the directions as to how much water to add. "Dad, before you do that, maybe I should check how much water." "It'll be fine." Fine was as good as breakfast got.

Things were all well and good despite some sogginess on the ground, until we got to the stream crossing on the north side of the basin. The stream probably doesn't have a name, but I'd say 'River of Death' is appropriate. It took two steady poles and some brave steps to get us all across, and my right leg shook for a good ten minutes from the adrenalin. No biggie. Since it was so early in the season, snow plagued us pretty much from here on out. It wasn't always on the trail and sometimes it was nice enough to be hard-packed and ankle deep instead of slushy and knee deep, but it did require a lot of extra effort to avoid the worst of it. Fortunately, trail maintenance was good and some tricky sections of rock and more sogginess were the worst of our troubles for the next couple miles.

I don't want to take you step-by-step to the top, but let's just say that there were many heart-pounding moments of slowly walking across uncharted snow, hoping it held my weight, or picking my way up rock crevices and across boulder fields. And the fact that what we thought was the summit was actually "Unnamed Peak to the East," standly at a measly 13,600. 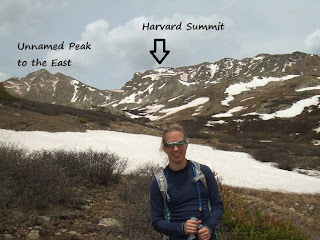 Oh, let's not forget the 40-50 mph winds. Yes, I thought I might blow off the mountain. In fact, after all of our efforts, detours, near-misses, and yesterday's failure prominent in our minds, it was the wind that forced us to turn back 100 feet from the top. Well, the wind, and the jagged rock face that stood between us and the summit. See, with the snow covering most of the trail, we ended up on the wrong side of the summit with no trail and no discernible path to the top. We worked our way down to just below the worst of the snow to try to angle our way to the right side, but the wind picked up again and we decided it wasn't worth being blown off the mountain. Summit bears at 14,350 feet ended up as small consolation in the face of Failure #2. Dad wouldn't call it a failure. We agreed to call it a "completion" rather than a "summit" since none of us have any desire to try it again. 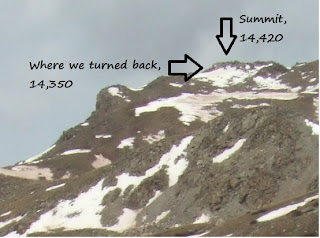 Oh, but wait, there was more fun on the way down. The way up didn't seem that challenging until we started retracing our steps. Then, the snow shelves proved less forgiving, resulting in snow down my pants. From the top, as in, waist-deep snow. Loads of fun. Then, my dad thought it would be a good idea to avoid the waist-deep snow by just sliding across on his rear-end. Nevermind the inherent danger is sliding right off the mountain onto the jagged rocks below. Nevermind that he had a giant walking stick in his hands that could have been dug in to halt his free-fall. Nevermind common sense. Nope, "don't worry, I'm aiming for the rock!" He hit the rock with his feet, not his face, and came to a nice calm stop. Meanwhile, I think Laura had a heart attack. And more snow and rock on the way down. More sogginess because the snow melting in the last four hours has added significantly the run-off. And we come to the River of Death. Which is now at least an inch and a half higher than the first time we crossed it. 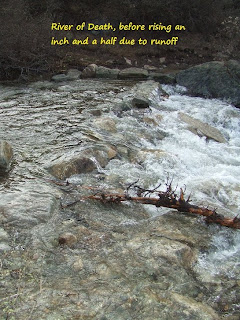 We chucked a couple extra rocks in the river for additional stepping stones. Let me tell you what happens when you do that. The rocks end up underwater and raise the water level even higher. Brilliant! Regardless, there was no better place to cross, so again we set out to defy death. About halfway across, I was unsteady on my right foot trying to decide if I could get my left foot to the next semi-above-water stone without having my poles swept out from under me by the current. Umm...ummm...NOPE. Direct footplant in the stream onto a stone at least two inches underwater. At least it was stable and allowed my right foot to reach the next rock safely. Laura's luck was no better. She took a step on one of our "new" steps that we made, only to have it fall out from underneath her. Four inches of her leg were submerged before her next safe step. Dad made it through the driest but definitely looked like he could fall downstream at any moment. Before all of this, I thought I was being optimistic when I said, "Worst case, if we fall in, we can grab onto that branch." Laura didn't think that was funny. We made it back to camp intact and Laura exchanged her soaking sock and boot for a dry sock and trail shoe. Yup, she finished the hike in two different shoes. No point in putting both shoes on because we knew there was still snow to come on the rest of the way down.

What we didn't know was that the rapidly rising height of the River of Death was a foreshadowing for the rest of the runoff we would encounter. Let's just say that several times on the way down, a stream had washed over the trail, leaving us shaking our heads and saying, "that wasn't here before." It was very wet, very muddy, and very slow-going. Apparently, it also was the wrong trail. Yup, not only can we not find the right path UP the mountain, but we are also stupid enough to find the wrong path DOWN the mountain. And when I say "we" I suppose I mean "me" because I was leading. Laura had been hinting that she thought we were on the wrong trail, but we were going down, which was at least the right direction, so we kept going. Then we came across an avalanche path (read: dozens of fallen trees down the hillside) that was definitely not there before, and we were all convinced it was not the right trail. Still, downward ho. Then the trail came to a dead-end. Wonderful. Dad set off to find another way down. He came back after several minutes (while he was gone, we checked the signal on my phone to see if we could GPS our way out of it, without success), and said he found "a trail." Not "the trail," just "a trail." What choice did we have? Eventually, we discovered the trail was the fork to Mt. Yale and we eventually ended up back on the right path. And that brings us to the end of our encounter. Doesn't it make you want to climb Mts. Harvard and Columbia?
Posted by M Zap at 8:11 PM 1 comment: