This is almost an annual Christmas Letter

I really thought I had it in me to send out an official Christmas letter this year, but as with many things in my life, execution doesn't always match ambition. However, this year saw a lot of ambition leading to execution in the form of a somewhat modified New Year's Resolution. Instead of my tried and true "do three things outside my comfort zone and go somewhere new", I set out to attempt a new hobby for every month of 2018. I've never really had a hobby that I considered my "thing" and I'm convinced that if I just keep trying new things, I'll discover something that brings me immense joy and at which I also happen to inherently excel. Spoiler alert: still looking. My attempted hobbies for the year ranged from "I never need to do that again" to "Let's do this every week!" and while I didn't quite achieve 12 months of success, I figured I better write down what I did do so I have proof.

Backcountry skiing to a 10th Mountain Division Hut– Skiing uphill is way harder than downhill.  I put this firmly in “never again” territory for 9 months, and then signed up for the 2019 hut trip.  At least this time, I have a better understanding of how much whiskey to bring. And blister avoidance techniques.

Broomball– Think outdoor ice hockey in tennis shoes with tiny brooms instead of sticks. At least it was so cold that when I wiped out, I had layers to cushion the fall. Maybe I should talk to the league about allowing YakTraks.

Axe throwing– New hobby for the win!! This is apparently the latest Denver craze, and one I highly recommend. If I was more willing to deal with downtown traffic, I would seriously do this every week.

Baking a Pie From Scratch- It was edible. And I wasn't so intimidated that I wouldn't try again.

Cycling- While I won't call myself a cyclist, I did manage to train for and complete the 2-day, 140-mile Bike MS with my dad.  Some of you may recall that the Zapapas family Christmas letter from 2010 described this father-daughter outing, not incorrectly, as “child abuse.” Still, I am the proud owner of not one but two pairs of padded bike shorts and intend to use them (albeit somewhat less) in 2019.

Doctor Dolphin- While I had my first introduction to Camp Wojtyla last year, this year I was solo for the week, serving as camp medic for 60 middle school girls and their counselers, surviving a state board inspection, and rocking the hammock. Thanks to an enthusiastic sherpa, by the end of the week, people were calling me Doctor Dolphin at least as often as they were calling me Doctor Laura.

Vinyl- I think you can count this as a hobby? I bought myself a record player and have SLOWLY started building my collection. I think I'm up to nine records, but it's amazing how hard it is to find an album where you like the whole darn thing. Used record stores FTW (#dollyparton, #bingcrosby)

Making Vanilla Extract- Some relative (maybe great-grandma?) used to do this, and I thought I'd give it a whirl.  It's actually pretty darn easy, not too expensive (would be cheaper if I had used a more thrifty ratio of bean to booze), and makes great Christmas gifts.

A couple notable not-first-time fun things: hiking a 13er (South Arapaho Peak), mass on a 14er (Mt. Evans with the Capuchins), being a really cool Auntie (it's easy with the best niece ever), stand-up paddleboarding (twice), solo camping trip (remembered the sleeping bag this time), Escape Room (hooray Kinders!), rifle shooting (harder when you're left-eye dominant), wiffleball (switch hitter!) and volleyball and softball, and another dozen Colorado breweries checked off the list (plus a couple in Austin). 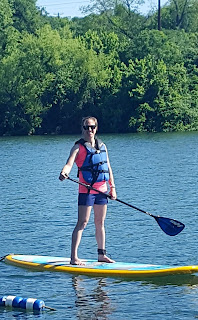