What you can get me for my birthday

A little on the pricey side (not relatively speaking in the boot world, just for me to buy after having purchased a $550 plane ticket), but with a day off to shop, I have found the cowboy boots I would like to get. They feel like slippers once they are on for about five minutes. Unfortunately, I think Sheplers is the only place that sells them and I don't anticipate being able to find them any cheaper. Still, next time I'm in a splurging mood, for a hundred buckaroos, I can have... 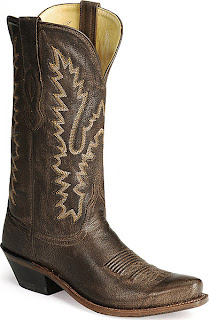 More info in case the picture doesn't do the boot justice. Visit Sheplers.
Posted by M Zap at 2:57 PM No comments:

Well folks, I had envisioned grand things for my 100th post. No such luck. Maybe I'll think up some phenomenon for number 101. In the mean time, I wanted to jot down a funny story even though nobody gets pharmacist humor. Last night at work, I was in the IV room which normally doesn't involve a large amount of critical thought. However, I was filling a dose for 998mg of acyclovir (10mg/kg on a large kid), after having just a couple days prior found out that our ID team likes to cap IV doses at 800mg, even on the really big kids. I mentioned this to the other pharmacists working, hoping that one of them would have time to call a resident and ask about a dose change. About forty minutes later, the dose change came through. I poked my head out of the IV room and yelled, "Sonia, thanks for taking care of that acyclovir." She looked at me like I was crazy. Nobody had called the resident. Good thing our medical residents are telepathic. I might never have to make a phone call again. MLIA.

Also this week at work- events that make me think that doctors/nurses should sometimes be required to experience what they subject their patients to. Cases in point: A 1,000ml vancomycin enema. A 5.8ml IM injection. Running IVIG at nearly 3x the max rate, giving the kid rigors, HA, LOTS OF PAIN!!! And, after taste tests, any po suspension dose of clindamycin, levofloxacin, dexamethasone, ranitidine, acetylcysteine, etc.

And that's enough thoughts of work for my day off.
Posted by M Zap at 12:11 PM No comments:

Well folks, I have an hour to kill until the 2-HOUR SEASON PREMIERE OF CHUCK!!! and I am stuck at my parents' house because I promised Kelly I'd watch it with her but she won't drive to my house to watch it because she doesn't want to drive herself home afterward. So I agreed to stay here until 8:00. And while an hour isn't nearly enough time to finish this blog, I figured I could start it because I've been wanting to write on this topic for some time. In no particular order, my favorite movie scenes of all time:

While You Were Sleeping- dinner scene, a la Beef and Nazis. It probably takes a few times through to catch every bit of conversation and the randomness in between. "You like brunettes." And it makes me laugh every time. Kind of like the lost "Go to your room" when Mary tells the Callahans that Lucy is pregnant. It's like knowing a secret that nobody knows to watch that scene and know exactly what's going on. And it reminds me of the wonderfully chaotic Zapapas family Christmas brunch.

Waitress- "Dear Baby, I hope someday somebody wants to hold you for 20 minutes straight and that's all they do. They don't pull away. They don't look at your face. They don't try to kiss you. All they do is wrap you up in their arms and hold on tight, without an ounce of selfishness in it." Enough said. Also, every scene with Andy Griffith.

The World is Not Enough- any scene in which Denise Richards says something like "Do you wanna put that in English for those of us who don't speak spy." Because it cracks me up. She can't act, she is not even remotely believable as a nuclear scientist and she makes somewhat of a sissy Bond girl. And I love it. One of my fave Bond movies because it is so atrociously ridiculous.

Lord of the Rings: Return of the King- Pippin singing to Denethor as Faramir leads the assault on Osgiliath. The song is hauntingly beautiful and it brings the scale of a massive movie down to a personal level. It's been a long time since I've seen the movie, so I don't remember much except the ache that you feel as these men ride to their deaths. I could pick any number of moments from the trilogy (Aragorn kicking an orc helmet in anguish when he thinks Merry and Pippin have been killed, Arwen and Aragorn's reunion, Sunrise on the Battle at Helm's Deep), but this one in particular showed great acting, screenplay, score, direction, etc. For all I know about the technicalities of film-making anyway.

The Ultimate Gift- "My dream was a perfect day, and I'm just finishing it." Jason finally getting it, doing everything to bring joy to those that he loves. It helps that it included horseback riding. And Alexie Gilmore is charming as she realizes that Emily set the whole thing up for her. It makes me yearn with my whole heart to have a day like that.

Return to Me- There are so many quotes and little gems of moments to choose from. Picking up the red phone, answering it with "haven't you?" "She's not a Buick." "I will not have that name said in this house." "Is that possible?" "Potty-mouth's gonna change the bed." But the movie is stolen by Carroll O'Connor, Robert Loggia, Eddie Jones and William Bronder. Any scene with the four of them is brilliant! Especially when Angelo is screaming "He's got him in a choke hold." Love it! They play off each other so well.

Serendipity- The whole first 8 minutes or so. John Cusack being his adorable charming self and a world-champ flirt. That somebody could turn a chance encounter in a huge city into a romantic evening is encouraging to say the least. He's just so nonchalant about the whole thing, letting the night go where it may, and yet making it painfully obvious that he's trying so hard.

Ok, it's been 45 minutes but I'm getting kicked off the computer. Part two to be written at a later date. Sorry I didn't get as many in as I'd hoped. Cheers.

A bit of superficial fluff to counteract the deeper considerations of starting a new decade:

Caution: reading this blog entry may cause you to think of me as a shallow individual.

A friend of mine has warned me that when I start dating somebody, I can just throw out any preconceived notions of what I find attractive. Inevitably, if I like dark hair, I'll fall in love with a blond. If I like outdoorsy, I'll suddenly find nerdy academic to be tragically hot. (This one I seriously doubt.) But that's okay, because the spectrum of things that attract me are so wide and random that anybody I meet is bound to at least have two or three qualities. And when I say random, I mean RANDOM. Here's a starter list (in case anyone out there is looking to find me a nice man):

So there are a lot of options to choose from, and chances are if I'm attracted to him, he'll embody at least a couple of these. And then I can tolerate if all other qualities go against my preconceived preferences. Plus, let's be honest. It's the deeper characteristics- (moral conviction, honesty, compassion) that make the man anyway. The rest is icing on the cake. And I like all different kinds of icing.
Posted by M Zap at 3:32 PM No comments: