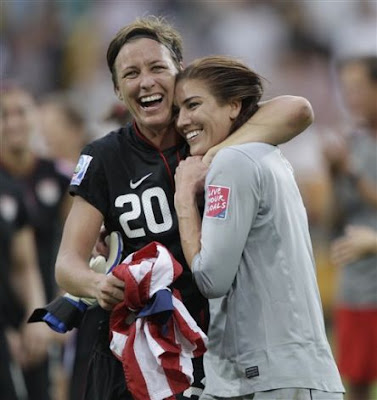 I stole the headline, but it fits appropriately, because even though I liked the "Hope Springs Eternal" headline more, today really was about the splendor of a full 21-(wo)man team of Americans with indefatigable spirit. I've always wanted to use indefatigable in a sentence ever since a Groundhog-Day-esque episode of cheesy 7 Days, a la old-school UPN.

(brief side-note before I get into this- just saw a headline on ESPN.com that said "A-Rod will have knee surgery" and I freaked out because I thought Amy Rodriguez was done for the WWC. Turns out the rest of the world is concerned with a different A-Rod.)

Wow, where to begin? I sit here completely drained emotionally, mentally, and physically, although the latter has more to do with having just finished working the weekend, and day 6 of 8 in a long stretch. And I think about how to put into words the incredible roller coaster of this morning's epic World Cup match. It was epic in every sense of the word. And I could walk through step-by-step and relive the joy, the agony--OH, THE AGONY--the suspense, the frustrations, the celebrations, the tachycardia and dyspnea (mine, not the players') as I watched a superior American side battle the Brazilians, but I am exhausted. And so, here are my lasting impressions in brief:

Pride. I have so much pride in watching this team make their own destiny. It's been a rough road to even get to this tournament, surviving a loss to Mexico and a home-and-home against Italy that I'd rather forget. But even before that, it's been a constant struggle for players as individuals and as a team. Hope's surgery, Abby's inability to find the back of the net (which I would argue speaks to how this team performs as a team), Tarpley's ACL tear, etc. But it has only added to the character of this team. They take pride in themselves, and they inspire pride in their fans. I am not only proud of their athletic prowess, their never-say-die attitude, their will to win, and their general beastliness of the best kind. But after today, I've never been prouder of their positivity and their sportsmanship. Watching Brazil decay into a mess of complaints, derogatory remarks, cheap dives, and an appalling display of what the analysts are calling "gamesmanship"--a euphemism for pretending to be hurt to run the clock because you aren't good enough to seal the game with your play--I am proud to be American. Because while we argued with the reffing (something on which I will not comment because I'm trying to wind down for bed) and allowed emotions to get the best of us at times, we would never stoop so low as to embarrass our fans or elicit boos where cheers recently reigned due to poor sportsmanship. I'm proud of you ladies. For keeping your heads high when playing down a player, or five since the refs were decidedly yellow today, and for playing your game.

Awe. I saw the replay of Abby's goal about 15 times today. I still can't get over it. As Tony DiCicco said, she literally willed the team to win. I can't fathom the perfection with which Rapinoe served that ball across two-thirds of the field, and I can't fathom how Abby, after 122 minutes of play, 54 of which were endured with 10 players, found the energy to find that ball and hit it home. The mental toughness to block everything out but herself and that ball, and the physical prowess to make it happen. In fact, I can't imagine how any of those players played that long a man down. The level of fitness is truly awe-inspiring. But man, that goal. 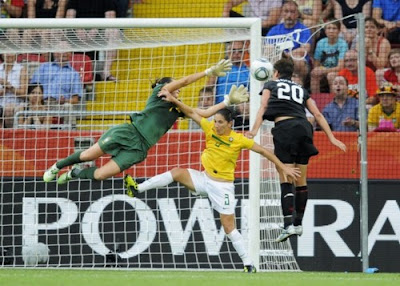 I was asked once in a speech class to name something beautiful, and I said "an Abby Wambach header." I believe that today, an entire nation agrees with me. And as long as I'm being dumbfounded by perfection, hello bonjour Hope Solo's outstretched hands, denying well-placed PK's, not once, but twice (I liked Abby's little dig in the post-game interview about legitimately stopped penalty kicks). 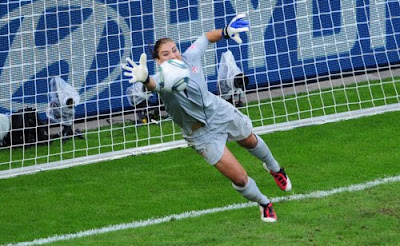 I've long maintained that she is bar-none the best keeper in the game today, if not ever. If 6 years as the starting goalkeeper for the U.S. and posting two, count them two, losses doesn't speak to her greatness, maybe you could talk about the hundreds of scoreless minutes (within about 50 of the all-time record) she's put up in goal over the dozen games leading up to the Sweden match in group play. Unbelievable.

Amusement. At myself and how worked up I get over this team and this game. I'm passionate about football, and I can get a little heated when the Broncos play the Chargers. But nothing comes close to touching how invested I am in this team and how out of sorts I get when I watch them play. I paced, I screamed, I pumped my fist, I about put my fist through a wall, I cried, I laughed, I screamed some more, I jumped up and down, I paced again, I practiced some deep-breathing exercises. I'd like to have myself on tape during a game like this just so I know what not to do when trying to make a good impression. I can't help it. I try to tell myself that it's just a game, that life goes on, that I have nothing at stake, but it doesn't work. So probably until the day I die, I'll live and breathe the USWNT.

There's so much more I could say. The injustice I felt as I read a poorly-written/poorly-researched article that claimed Marta took the first PK that Hope saved (it was Cristiane), and that Rampone served up the equalizer (Christie, I love you, but it was Rapinoe). The raging heartburn that almost prevented me from keeping down my lunch after the game. The incessant phone calls from Laura at every pivotal moment of the game. The sense of retribution I feel watching Hope be right where she should be in a World Cup match against Brazil. The incredulity that comes with the realization that Christie Rampone is 36 and a mother of two and matched the 25-year-old 5-time FIFA player of the year step for step. Pia playing air guitar and bear-hugging Rachel Buehler. Ali Krieger's composure to put it all away. But I have to go to bed. Because the real world beckons. The world that isn't lived on the soccer pitch. So, until Wednesday, I will bask in the glory of a well-earned victory. USA USA USA!!! 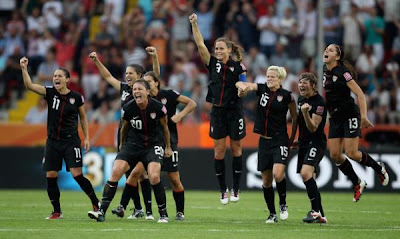 I'm pretty sure that's more what Dad was talking about when he wanted a blog post, but I just didn't have it in me. Glad you did. I got everyone in Housestaff to watch to key points of the game last night on the replay. Yay! Lovely.