After a couple good nights' sleep, I'm finally ready to sit down and talk about our adventures (though I can still barely walk and going down stairs is a joke).  I'm gonna skip the parts about stressing about whether or not the trip was even gonna happen, and the disaster of trying to find someone to work my Friday evening shift.  That's worth forgetting.  But the rest should be a highlight reel of my first 14er Mass (and my first hiking/camping with Fr. John).

Who: myself, Fr. John, young seminarian Chris
What: climbing Blanca Peak and Ellingwood Point, with Mass on top of Blanca
Where: the Sangre de Cristo mountains above the San Luis Valley
Why: Fr. John is four 14ers away from the set, and his new goal is to say Mass on top of each; this was his 15th 14er Mass (and my 15th 14er)

When I first got to Fr. John's house, I saw his packing pile (he wasn't quite ready, shocker) which included two ice axes, crampons, a helmet and rope.  I almost turned around.  Turns out that was the Switzerland packing pile, complete with all the gear needed to climb Monte Rosa, the highest peak in Switzerland.  Phew!

The drive down to the San Luis Valley was pretty uneventful.  The fun started when we hit the Lake Como road.  I can no longer claim to have never been off-roading.  Parts of the road were no worse than a bad dirt mountain road-- ruts, rocks, sheer drops off the side.  Other parts were bad enough that I was doing my best rafting "high side" in Fr. John's 4Runner.  He kept turning the music up louder to drown out the noises of the car taking a beating, so Mumford & Sons, the Avett Brothers, and Coldplay provided our soundtrack to the bouncing and jolting.  When we came across a stalled Land Rover, I started to wonder at the wisdom of taking the road head-on.  But, we made it to a parking spot about a mile and a half above where I would have parked.  Well, that's not true.  It was about 4 miles above where I would have parked, and about a mile and a half above where I would have had Fr. John park.  The car was making funny noises when we parked, but we couldn't figure out where they were coming from.  So we left, after sprinkling the car with Holy Water, praying that it wouldn't explode while we hiked.  From there, it was hiking up Lake Como Road to the campsite on the lake.  I had forgotten how physically taxing it is to hike with a full pack.  Cooking gear, rain fly, sleeping bag, pad, two liters of water, food, and of course, Chacos for camp shoes.  I was grateful that we stopped driving when we did after we came across Jaws 1, Jaws 2 and Jaws 3, so named because they swallow vehicles who try to off-road up to the lake.  It's been done, even by Fr. Peter in his Jeep, but you couldn't pay me enough money to sit in one of those cars.

The lake was worth the hike, a beautiful setting for our campsite.  Once we all got our boots off and our sandals on, it was a quick tent set-up and an even faster water run.  And then the talk started about what time to leave the trailhead in the morning.  Just as a reference point, when Dad and Laura and I did Harvard, we left the campsite probably around 7am.  Of course, we had to turn back before the summit due to winds, so maybe an earlier attempt would have increased our success.  When 4am started being thrown around as a time of choice, I bit my lip.  Fr. John has, after all, done dozens more of these than I have.  A storm loomed as we went to bed, and just before we turned in, the lightening started and rain was spitting.  It blew over shortly, unfortunately dropping the temperature about 15 degrees when the clouds disappeared.  Nobody slept well, I was wishing I had brought either my warmer bag or my liner, and 3:30 came both too early and not soon enough.

Thank goodness for the Jet Boil.  The rehydrated scrambled eggs were awful (I forgot to double the rehydration time for altitude), but the coffee was totally worth it.  After a quick breakfast, we were on the trail by 4:20.  The first hour was done with headlamps.  The sun rise over the valley was gorgeous.  The sun coming up behind the mountain and illuminating the traverse we would have to climb between Blanca and Ellingwood was uber-intimidating.  We hiked fast, blowing by the Blue Lakes, the waterfall, Crater Lake, past the ridges and up into the saddle.  The final 600 feet of Blanca was straight up the ridge, difficult Class 2 climbing until Fr. John took us off trail for the last 50 feet and it turned into Class 3.  Whoops.  The top was cold, but the views were fabulous.  You could see from New Mexico up to the Crestones.  Mass was quick in deference to the temperature, and it was a little odd being one of two people in the "congregation."  But I feel so blessed to have had the experience.  When Fr. John elevated the host during the Eucharistic Prayer, the sun caught the Eucharist and it made for the most beautiful image.  Part of me is glad I didn't ruin the moment by turning my camera on and snapping a photo, and the other part of me is kicking myself for not having preserved that moment.  I had to settle for a shot of Fr. John after Mass. 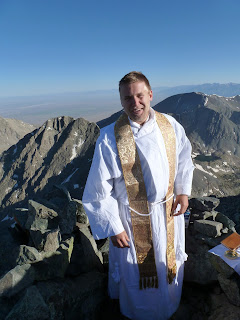 And then it was time to conquer the traverse.  With a slip of the tongue, Fr. John said "It's really worse than it looks."  I reminded him it was the other way around, right?  We just went for it, staying just below the exposed top.  Only at one point, when Fr. John was hugging a boulder and working his way around the side did I object.  For the most part, it was tolerable, made more difficult by the fact that my knees were wobbly from the first ascent and the 600 feet of descent down the ridge of Blanca.  But we traversed in speedy time, hitting the Ellingwood Point summit by about 9am.  Fortunately, the sun had finally started to take effect and the summit was far warmer than Blanca.  Looking back at Blanca made me so glad that we had done that one first.  It really was a beast.

The descent was nothing special, killer on the knees and ankles, lots of loose talis, one minor snow field crossing that took much longer than it should have because I couldn't erase the image of my mother sliding down the ice on Mt. Sherman.  Before we knew it, we were back at camp, breaking it down in record time to hit the road.  With full packs on, the descent of Lake Como Road was the hardest part of the hike for me.  My legs were shot, my feet were starting to rub in my boots, the flies were buzzing around my face, and Fr. John hikes a lot faster than my little shrimp legs can follow.  He disappeared ahead of us.  We got to the point where we thought we had parked the car, and it wasn't there.  We had three thoughts.  1- Fr. John decided to play a prank and drive the car down farther.  This would have resulted in bodily harm.  2- Someone was hurt and needed a quick evac.  3- Fr. John needed to start the car and drive it a little to make sure it still worked.  Turns out, that section of road looked eerily similar to where we actually parked.  And it was just a little farther down the road before our end was in sight.  Sandals on, we made the treacherous descent down the road, music blaring, heads nearly hitting the ceiling.

When you hike as long and as hard as we did, the only thing to do is eat as much as possible while you can still justify it.  We stopped at this hole-in-the-wall convenience store in Blanca, run by two Polish brothers who make the most amazing kielbasa.  Giant sausages split on a roll, pickle, kraut, jalapenos, mustard.  And a cold Coors.  We sat on the curb soaking in our success.  And then, after several hours of traffic back to the 'burbs, it was a stop at Steak 'n' Shake for double steakburgers, extra crispy fries and a dark chocolate shake.  It's been more than 40 hours since we finished hiking, and I can still hardly move.  I think my quads will be sore for a month.  But it was worth it.  It was worth the physical effort, the lack of sleep, climbing outside my comfort zone, suffering through two days of Fr. John calling me Laura, finding my bathroom on the side of the mountain, eating crappy rehydrated eggs and frozen energy bars, and not being able to walk for a few days.  I am grateful for our very own Pier Giorgio priest who finds God in the mountains and takes others there to meet Him.

Excellent blog. I thoroughly enjoyed reading it. Thank you!