Drinking and Dining in the Twin Cities (ok, St. Paul wasn't actually on the agenda)

If I were a food critic, my column to close out 2010 and ring in the New Year (by the way, if you add the digits in 2010 you get 3, which is my favorite number...inside joke digression, sorry) would be full of front page finds. And maybe a couple footnotes. Having just returned from a wonderful first trip to Minneapolis for the wedding of some dear friends, I am appalled that in three days, Marijo and I had more fun food finds that I have in a lifetime in Denver. Maybe that's a stretch, but without further ado, here is my Minneapolis recount:

Day 1
The News Room: While I went to the rehearsal dinner, Marijo headed out to find some dinner and a bar willing to show the Husker game. Check and check, mission accomplished at The News Room- a rather large bar/restaurant with each room carrying the theme of a different section of the paper. Giant headlines plaster the walls, including two of my favorites from The Onion, found in the women's bathroom: "Women are smarter than men" and "Miami Police Dept to debut new hot pink and aqua uniforms." But one of the best parts of the bar was the actual bar- a giant ship, complete with sail, rope ladder, mast, etc. Top shelf liquor is literally "top shelf", with access only granted via several steps up the rope ladder. 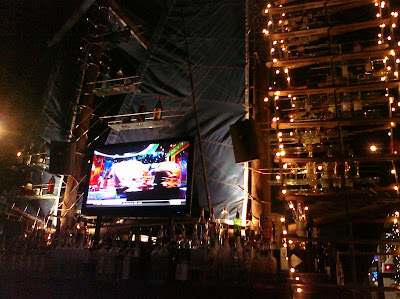 But, since this is a food blog, let me just mention the highlight: Fried brie curds with blueberry ketchup. Yes, blueberry ketchup. The curds literally melted in my mouth and the ketchup was sweet and tangy, a perfect condiment choice. Best bar food I've ever had. The beer, though pricey since happy hour had ended, was good as well- Bells Amber Ale and Porter, and Schell's Lager. It's a good thing that the bar was such a hit because the Husker game definitely wasn't. Oh, but props to UNC for an exciting comeback finish to their bowl game. Poor Tennessee.

Day 2
The Wienery: Our morning was slow to start since the game ended so late, and we headed out to Midwest Mountaineering, a gem of a store in the east end of the city. Lots of trying on, wishing we had more money. And by the time we were ready to walk back to the train station, we were starving. The plan was to eat downtown because my google maps phone app was not revealing any nearby eatery gems. However, we walked past The Wienery, clearly some sort of hot dog joint. Tiny, hole in the wall, but with a few normal looking people in the window. Since I was ready to gnaw my arm off, we tried it out. This place gave new meaning to the word "dive" but my brat with sauerkraut totally hit the spot. Marijo opted for the "Downtown Dog" polish, with cole slaw, chili and cheese on top. Like a whole picnic in a bun. And of course, let's not forget the giant basket of greasy fries, two whole potatoes worth. 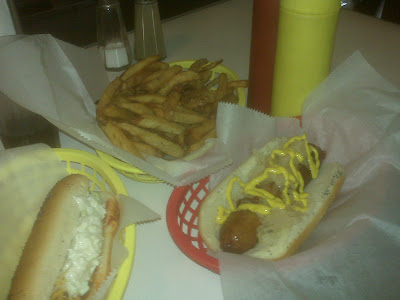 Not a crumb was left. We had a good laugh at the angry customer whose food couldn't be ready fast enough for the poor dog he left out on the sidewalk, and an even better laugh at the poster behind the counter. 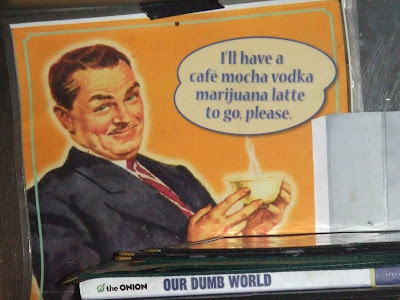 The Local: After working out in the fitness center to counteract the two-potato fries, we headed to an Irish pub for dinner before the wedding. The interior was pretty upscale for a pub, done snug style with lots of little rooms offering a more personal feel. Since it was happy hour, I decided to ignore the fact that I was reading in the wedding and had a Boddington's (so smooth), and Marijo enjoyed a wonderful Kilkenny Cream Ale (Yum!). The wild rice and mushroom veggie burger was to die for, and the "better than couscous" quinoa salad was perfect for someone who was still suffering the effects of lunch. We really wanted to stay for the Guinness Mousse, but the only reason they let us have a table was if we promised to be gone in time for a 6:30 reservation. Plus, we had a wedding to get to.

Day 3 (there's that number 3 again)
Hell's Kitchen: highlight of the trip (besides the wedding)! There is no way to convey everything that I loved about this restaurant and our whole dining experience. I only hope that anybody reading this who is inspired to check out the restaurant has half as much fun as we did. First of all, it's in the basement, so you literally descend the stairs into Hell. Second, it's New Year's Day, so everyone is nursing hangovers with Bloody Marys and Mimosas. All of the servers are in pajamas, ranging from flannel pants and a bathrobe to a full red "onesie". We ate at the bar which turned out to offer two important views. Across the bar against the back wall were the "Absolute Worst Seats in the House." On the wall, it described why they were the worst seats in the house, ranging from "You have to deal with the kitchen chaos" (they were right next to the kitchen doors) to "You have no privacy because everyone is reading this." They did offer a free caramel pecan roll (huge and decadent) to anyone who still chose to sit there. Directly behind us, the Jana Nyberg Group took the stage and performed a jazzy brunch set, including a lovely rendition of Santa, Baby and some classics like Fever and What a Wonderful World. They also played some original stuff which you can download for free on their website. Other highlights included Saturday morning cartoons playing on the bar TVs, creepy bathroom hologram portraits that transitioned from normal looking 1800s people into skeletons and creepy creature-of-the-night zombies, meeting a Creighton grad at the bar, and coffee that was described as so strong it is "guaranteed to restore virginity." The place just had a lot of character. Oh, and did I mention the peanut butter?!? Yes, it was phenomenal. Best I've ever had, and a great complement to the toasted sausage bread (yes they put bison sausage in their bread). The potatoes were also noteworthy. I highly recommend this place to anyone.

The rest of the food isn't really worth mentioning. Stuff like mall snacks and hotel restaurant soup because it was too freezing and we were too tired to make any further forays into downtown. But let's be honest, after Hell's Kitchen, everything would have been disappointing anyway.

And, just to sidestep away from food for a second, check out our one-of-a-kind purchase from the Mall of America--Japanese baseball jerseys! 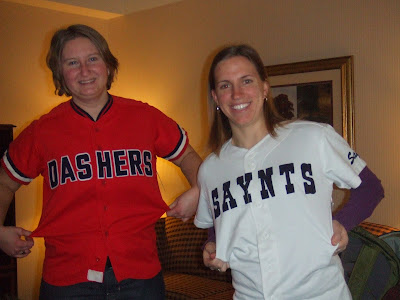 Thanks to Peter and Jenny for a lovely wedding and an excuse to explore the city. Happy New Year!
Posted by M Zap at 7:44 AM