Give a Little Heart and Soul

Well folks, the moment was 13 years in the making, ever since that fateful summer of '98 when Mimi and Grandad scheduled a family reunion for the same weekend as a very important Red Rocks concert. It took several months to get over the massive injustice (appropriately, the immensity of the injustice has diminished significantly over the years), and I spent the next decade making up for it by buying every CD, watching every youtube video, possibly spending hours looking through fanart and teen magazines.

Courtesy of Alice 105.9, I finally got to see them live, and am old enough now to appreciate the musical talent, and still young enough at heart to jam out to a little Mmmbop. (Hey, when they played it on the 80's throwback station at work, I turned it up and endured the ridicule.) It was a little surreal, I'll be honest. There were moments that I couldn't quite believe that I was there. Like, maybe, the moment that Hilary caught a guitar pick that Ike threw into the crowd. Yes, people, that does happen to anyone and everyone who is NOT ME.

One of the best parts of the night was talking to other fans in line. Three other women who had all made the journey solo, brave souls, who had of course followed the band through the last 13 years like we had. We swapped "coming out of the closet" stories, because this is in fact one of those embarrassing things that you hide from everyone but the most trusted confidantes. We talked about how we came across Middle of Nowhere (my neighbor gave it to me saying, "I thought they were girls, now I don't like it), and which brother we crushed on. The three 27-year-olds were naturally in agreement, and the other two girls were younger and therefore had both defaulted to Zac. Anyway, the fans were super fun and funny and very excited.

I'm going to skip over Meiko, the opening act, except to say that she was funny, and enjoying her contraband wine on stage, and a typical singer-songwriter. She did have some funny intros to her songs--like after a break-up with a boyfriend, he asked her to sing him one last song, and she said he wouldn't like it and he didn't care; so she sang him a song with a chorus that went something like "you're a good looking loser and I'm the one that got away." Literally, those were the words.

On to the main event. The Musical Ride Tour operates on the premise of giving fans the option of choosing one of three full albums for the band to play during the concert. Each city has three of the five studio albums as options, and then fan voting decides the rest. Boulder (and myself) chose This Time Around. Two of my favorite songs from TTA are slow songs that otherwise would have been left off a set list, guaranteed. And two other songs from TTA are two of my favorite Hanson songs anyway, so I wasn't disappointed. I spent large portions of certain songs trying to figure out how to get my pictures to focus when I was zoomed in so far. But the energy was high, the fans thrilled, and everyone was having a great time. 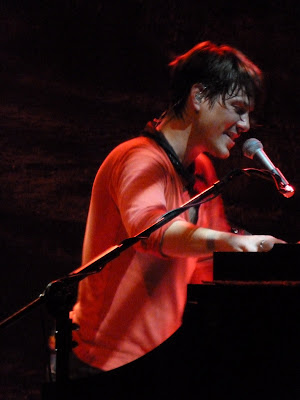 You know the concert is a rousing success when you get done and don't even notice they haven't played your favorite song until they start the opening chords during the encore. (Don't worry Laura, every person there knew every word to Penny and Me.) It was equal parts throwback and new stuff. They played my three favorite songs from their latest album, all of which are big-band-style dance-inspiring pop songs. It was easy in the throes of it all to forget that later I'll have to go back to being slightly embarrassed. Everyone in there was unabashedly enjoying themselves.

Now it's just time to wade through the hundred pictures to find the best of the bunch. And for those of you out there who are skeptical that this trio can offer something other than 90's bubblegum pop, go find "Give a Little" or "Thinking 'Bout Somethin'" or "Been There Before" and give it a listen before you judge. 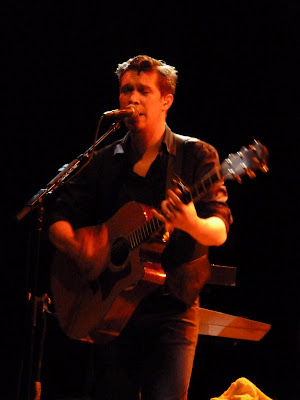 Your zoom is AMAZING! Super fun! I made MJ and her other friend watch Pia singing and Roomies for Life in celebration of last night.