It's the bulls and blood, it's the dust and mud...

So, my New Year's resolution is now complete. One new place and three new things. Got the place out of the way, and so much more, on my cruise in April. Speed dating and motorcycle classes certainly qualified for new things. The point of the resolution was to break out of my comfort zone and those two things certainly fit the bill. Thing number 3 was elusive for a little while because I didn't want to include something that was a first, but not a stretch. Examples include my first Broncos game (yay!), getting published (double yay!), hitting halfway on my beer tour (ok, that might be a stretch), or a certain concert (see previous blog post), etc. Number 3 was going to have to be karaoke or dancing in public or something equally nerve-wracking, given the weight of the first two firsts.

Well, give me a couple beers and leave me temporarily insane from two hours of screaming along with the Pid Army--enough material for a whole other blog post that probably won't get written, but let's just say that it is an experience better tolerated by the inebriated and or those lacking a sense of smell--and I just might climb up on a mechanical bull. It's been on my bucket list for a few years, but I never thought I would actually do it in front of other people. I think I did pretty well, given the Blue Moon buzz, although my exit from the ring was a little less than graceful since I was dizzy and tipsy. Those several seconds of one-handed craziness were enough to successfully fulfill the resolution. I still wasn't brave enough to give Allyson a run for her money talking to total strangers and trying to pick up guys, but maybe one day after enough firsts, I'll have stretched my comfort zone to epic proportions. Until then, I'll settle for the small victories. 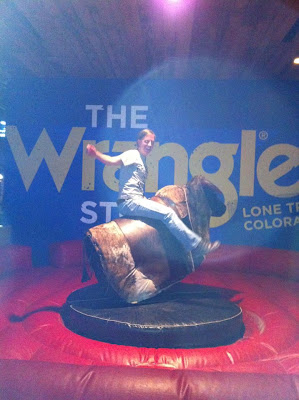