Took me a while to get this picture saved.  Had to do a screen shot of the video because my photographer didn't start the stills until we were spinning.  I wish I had something profound to say about my experience jumping out of a plane.  I wasn't really nervous or scared except standing at the door of the plane.  Once it was real, I had about half a second to think OMG! and then we were gone. 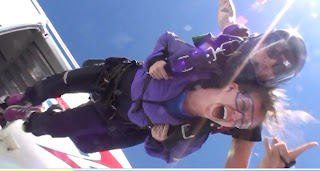 The free fall felt like floating, not falling.  Well, floating while being underwater, because I did find it hard to breathe, despite following explicit instructions to keep my head up and breathe through my nose.  But the pictures show that I was smiling at least half the time.  The canopied descent down after the parachute opened was an awesome way to see the Front Range.  Long's Peak was staring me in the face, and fields stretched out below.  Landing was a piece of cake.

My favorite part has been listening to everyone else's reactions.  It didn't seem like that big of a deal to me.  Honestly, my motorcycle and kayaking classes were far more scary for me.  This was just something I've been wanting to do, so I did it.  I'm grateful for the pictures and the video because the details are a wee bit fuzzy.  And I'm glad to look back and say that I did it.
Posted by M Zap at 8:32 AM

Kayaking was slightly scary but you want to do it again. Right? :)

Ummm...I'd do it again if I had nose plugs that worked